Abu Dhabi is the capital and the second most populous city in the United Arab Emirates, and the largest of the UAE’s seven emirates. Abu Dhabi is full of archaeological evidence that points to civilizations.

Publically opened on 3rd of November 2010, Ferrari World is the first and only Ferrari-branded theme park and largest indoor theme park in the world, also, offering the fastest roller coaster in the world that reaches an exhilarating speed of 240 km/h (150 mph).

Also, being nominated as the second best waterpark in the world by the Los Angeles Times, Yas Waterworld offers thrilling rides that you will not get to experience anywhere else in the world.

The Louvre in Paris announced that a new Louvre museum would be launched in Abu Dhabi, and Guggenheim in New York announced the same news, both of these museums are already open to the public respectively. 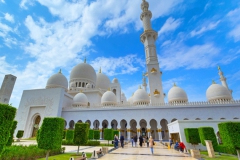